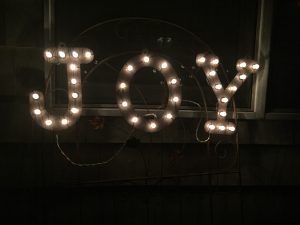 I’m amazed! There is a world that exists on Christmas Day beyond the one that I’ve always known. As I run through the trails today it reminds me of how I felt when I stopped drinking alcohol. When I quit alcohol I so clearly remember being shocked that there were actually people who did not revolve their life around it.  This morning, I ventured out into a day that I have always associated with a family opening presents, breakfast, pajamas, preparation for a big holiday dinner, the adrenaline rush, full of anticipation and joy and then deflation after the holiday moves past its climax. I just ignorantly took for granted that everyone experienced a similar situation. I celebrated the tradition of what has been a more familiar version of the Christmas I know with my children yesterday. My marital separation papers as defined by the court stipulation states that my kids will spend the actual day of Christmas with their father this year. My point is, it could be a scary change but it doesn’t have to be. Quite differently today, I opened my eyes and looked around to a Christmas Day that was carrying on without me, one that I have never known. I realize how self absorbed my beliefs have been.  There is a world of difference out there. Difference of tradition. Difference of priority.  Difference of religious belief. Difference in fortune. And the list goes on and on. I ventured out in to the unknown this morning to meet my painter at my store who I reminded 3 x that it was Christmas and he didn’t flinch no matter which tone I said it in.  Hmmm, where’s his family I wondered? After that I met a group of bike riders from my bike club as we set out for a 30 mile ride (though cut short due to fog and rain). When I got there I introduced myself with “doesn’t  any one know it’s Christmas?” Someone replied with “we’re all Jewish”. (I’m still not sure whether that was a joke or not.) Later I went out for a 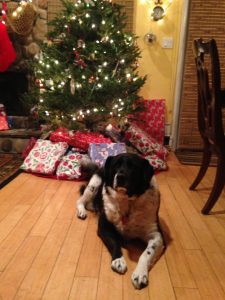 run passing endless dog walkers and runners. (I didn’t pass anyone going the same direction as me. I’m learning to accept that I am just not meant to be a fast runner).  “Did Santa come to their house this morning?” Dunkin’ Donuts was open, there were the bagel stores, 7-11; the hospital. I realized that we actually don’t live in a cookie-cutter society. There are a lot of things that we try to mold. There’s also lots of nonconformity.  Because we’ve carried on our cocoon like image my ex-husband and I, and hosted or attended Christmas with the comfort of family and home, it just never occurred to me that anything else existed. I anticipated emptiness waking up without my children this morning on this Christmas morning but committed myself to being open. What I received was an abundance of witness and observation. I allowed new possibilities to penetrate new circumstances.  What I received today was not a gift I can open. However, gifts that I appreciated so much more. Love, peace,  offerings.  The unwrapping of these blessings was slow and impactful, like sucking on a piece of dark chocolate all the way through until it dissolves on my tongue. I am physically without my mother and my children today for the first time ever. Their spirit has filled me so much that it’s carried me through the day.  What they have given me, I’m able to pass on to others. Today helped me to put in perspective that there is always another way.  Even though there are things that I haven’t thought of before it doesn’t mean they don’t exist. There are seemingly endless possibilities to many things. Whether it be how the world can be seen without intoxication or a Christmas Day without my children, there is a life of abundance waiting for us whenever we’re ready to pursue it.