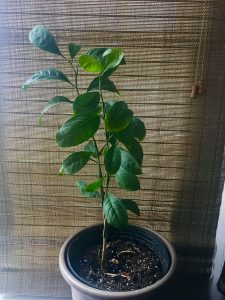 My plant is thriving. Nearly 3 years later. The plant had been given to me by my 2 closest friends. They were (still are) married to each other.  They were my anchors in my greatest times of need. The plant was a gesture of kind wishes as my marriage came to a close and my unknown life began charting its course. Our friendship was graced with 15 years of memories. I watched as that plant died simultaneously with the dissolving of our friendship. The friendship was extinguished abruptly after the mutual admission of romantic feelings that developed between myself and (husband). Two head-strong individuals: we masked, misdiagnosed and mislabeled the feelings until the obvious was too much to ignore. It was a painful, reluctant, though necessary life-changing admission after a harvest of denial to self and one another.

A brief time of extraordinary love followed by seemingly endless, extraordinary pain. I battled the purpose. I challenged my God. I cursed and damned the cruelty of it all. I watched as the plant died, feeling as if I, too, had died. Every day, one day at a time, I continued to water a dry and brittle stick in a lifeless bowl of dirt.

One day I noticed a green sprig peeking out of the soil.

Daily, I clung and meditated and began to watch my plant grow. A different species than the one I had been given or ever predicted.

Growing greener and stronger every day until the old dead plant became an important memory with a clarifying purpose. It’s brought me to bare witness to the strong and pungent leaves on this new growth that sits in the sunlight on my window sill, accepting water and love in the same soil where one life-form was sacrificed to become the thriving and abundant specimen that has replaced it. Somehow there is a comforting, bittersweet knowing, that somewhere, my irrecoverable friends are watering their own soil and discovering new growth as well.